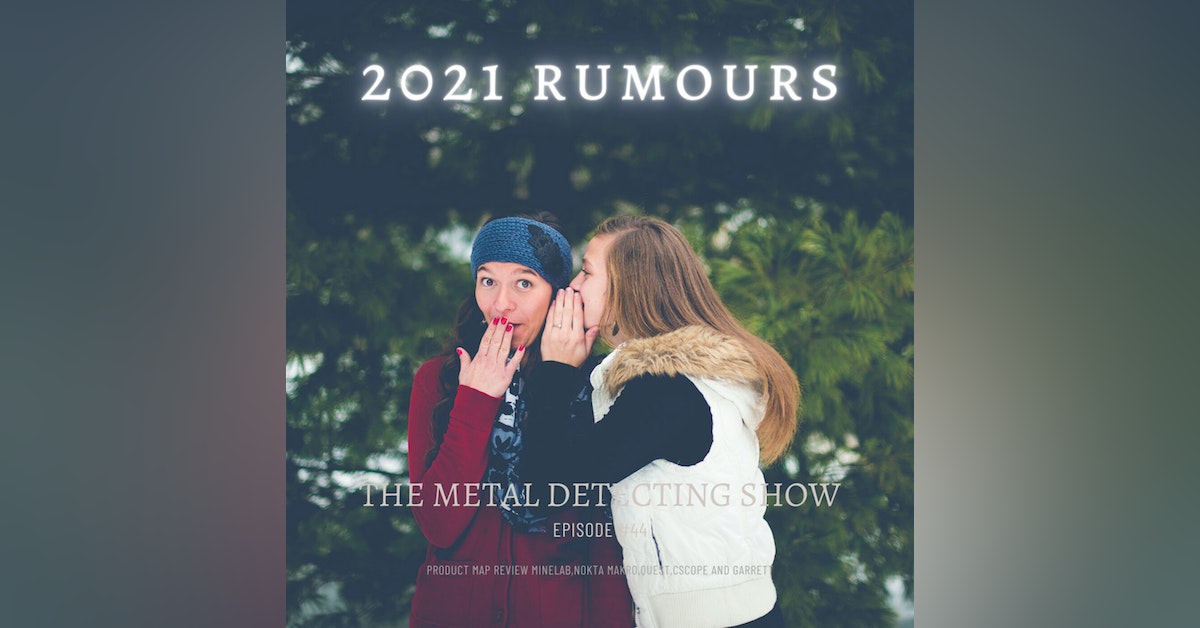 This week I was to talk about the new releases rumoured to be coming out this year I look into the product roadmap of Minelab, Garrett, Nokta Makro, Quest and Cscope. So let’s get on with the show.

Other Ways to Support the Podcast: http://themetaldetectingshow.com/become-a-sponsor/

Leave me a voicemail: https://www.speakpipe.com/TheMetalDetectingShow

Hey Everybody. Welcome! to Episode 44 of the metal detecting show podcast. My Name is Ciaran and I have been Metal Detecting for nearly 30 Years

This week I was to talk about the new releases rumoured to be coming out this year I look into the product roadmap of Minelab, Garrett, Nokta Makro, Quest and Cscope. So let’s get on with the show.

Hey everyone before we start I want to thank you for listening to the podcast and I hope you enjoy the show this week  but before we begin I want to give you the following information.

And now If you would like to leave me a voice mail please do so on speakpipe.com/themetaldetectingshow the link will be in the show notes.

If you would like to buy me a coffee you can Actually do so now with https://www.buymeacoffee.com/metaldetecting

Hey Detectorists! Welcome to Episode 44. I have no news this week due to covid restrictions its been super quiet on the detecting front so hoping for a more active week next week. So Lets get straight into the show.

This week I want to review what new detectors or features that will be coming out this year.

To do this I have spent the last 4 weeks being a cheeky chappie pushing and prodding for any rumours or sniff of rumours that may be slightly true and to do this I reached out to several brands Including the following Quest Metal Detectors, Garrett, Nokta Makro, CScope and Minelab.

All with varying degrees of success.

If Starting with the least responsive and that would mean Starting with Quest I reached out several times to look for information and I’m afraid that I received no response here and in fact the email address provided on their website returned as undeliverable.

Which is surprizing considering they advertise on their site for social media applications to help drive the quest message.

So not a great Start with Quest up next Came Garrett who were the quickest to respond even if the information was not great and I quote “At this time, Garrett has not announced any forthcoming products, nor do I have any info on such.”

I thought this was a little snappy but it is Clear Garrett do not have any products pencilled in for release in 2021, I suppose this in not surprising considering their recent release of the Apex.

I do however thank Garrett for responding with a fairly definite response unless there not telling me something.

In the same form factor as the simplex obviously to provide direct competition to the Equinox.

The expectation is that this will show up at some stage in 2021. I did reach out to Nokta for comment and they very deftly avoided the question, however I am in the process of organising and scheduling an episode with the Business Development Manager so I will be sure to get my teeth in here.

I can say though that through my research it is very clear that Nokta Makro are losing ground to the Minelab as people who were waiting on the Lightning have given up and relented to purchase the equinox.

Next we look to CScope for any 2021 rumours with the pending release of the EVO6000.

A detector That I am very excited about and to be fair to Cscope they didn’t disappoint with the level of conversation they engaged with me in.

Initially they gave me the information they sent to all partners which included the following statement and I Quote.

“In the Spring the Coronavirus pandemic hit us, here in the UK. As a result of the restrictions put in place by the UK government, we found ourselves unable to travel to different sites to undertake testing of our prototype EVO6000s and our design and development engineers were no longer able to work from within our factory and to make use of our electronics laboratories.

This I can totally understand and empathise with, they then follow up with further clarification

To give you a little further insight into our earlier message, Ciaran  . . . At this present time we have two overriding concerns: satisfying the significant backlog of orders for our existing products that we now have, and, continuing to remain operational under the threatening cloud of the Coronavirus that is particularly prevalent where we are based in the UK.

We felt that adding further pressure on our factory and manufacturing staff by releasing the EVO6000 was at odds with those two primary concerns.

Our manufacturing staff are currently working near-12 hour days to try to get on top of the substantial surge of orders we have recently received.

To put more pressure on them was not right and so we, very reluctantly, took the decision to delay the EVO6000’s launch until February or later.

If there is one thing that we have seen with the Coronavirus, it is that predicting the future is a fraught and mostly unsuccessful exercise.

This is why we have written ‘to delay the supply of the EVO6000 until February at the earliest’ rather than commit to a specific date.

I for one am very excited for the Evo6000 as it was a Cscope catalogue that I used to look at longingly when I was a kid so it would be great for them to get the Evo6000 over the finish line.

I have to say this was a top response from CScope exactly what other manufactures need to take note off as in the Era of Community development and support it is important to communicate with the community and Cscope are doing this very well here.

Finally onto Minelab and if you were to stick a brand sticker on the rumour mill it would have to be a minelab sticker who Early in the second half of 2020 released a visualization of the roadmap for 2021 stating that there will be 5 new releases this year.

Now I can only find mention of 4 across the forums but lets break the rumours down and finish with their response.

So pencilled in for release are the following products or features. MF5, SilverSaver Series, Geo Sense_pi , the GPX6000 and some mystery product that seems to be related to some form of transmission of 2.5Ghz according to a recent FCC application from Minelab.

Starting with the GPX-6000 because simply a little more is known about this as Minelab have started to release collateral to the partners in fact they have officially launched the GPX6000 to their European partner network last Friday the 15th of January.

The GPX6000 was released with one of the other rumours GeoSense Pi of which there is very little know about but which the rumour mill feels relates to some form of enhanced GPS however I think that people are looking too deep into the what ifs or what they would like it to be.

I think GeoSense Pi relates to some form of signal processing maybe some form of refined discrimination on the pulse induction machine as the marketing collateral clearly indicates an ability to hear all gold clearly and accurately.

However Back to the GPX6000 another specialized gold prospecting detector this looks to be a standard play positioning the GPX6000 right between the price points of the GPX5000 and the GPX7000 at around 8000 Australian dollars. Supposedly it has an easy barrier to entry and more simple to use but I think that would be a first for Minelab so lets see,

also Professing to have an easy swing which doesn’t necessarily translate into a lighter machine but a more balanced heavy machine. So a lot of Spin in the marketing material to account for previous difficulties Minelab had with these machines.

Next little bit of information we have to go on is simply the 2 letters and one number MF5 rumoured to be a replacement for the CTX which was released 8 years ago. this I would like to see however unfortunately for me some eagle eyed forum user pointed out that the MF5 logo in the minelab patient shared the same Font as minelabs mine detection device the MDS-10 so unless Minelab a suffering from a sudden bout of Lazy marketing I think it is pretty certain that the MF5 will be some form of Mine detection device.

So up to now no real excitement to be had for the standard unspecialized treasure hunter like me till we look at the Silver Saver Series which again rumour has it that this will be a high end coin shooter focused more on High conductivity targets such as Silver coins for example.

That’s the rumour but of course I need to add my two cents here I cant help but feel that the Silver Saver logo which looks very surfy evokes a feeling in me of beach’s, sea and surf and maybe it’s a play on Marvels super hero the Silver Surfer as certainly there are some similarities in the logos.

putting 2 and 2 together and getting 100 maybe the Silver Saver series in a Refresh of the Excalibur series which went out of production in 2006. Of all the rumours from Minelab this is the one I am most excited about.

So that’s the 4 rumours we can directly reference however minilab did say there was a fifth which FCC search indicates that this is potentially something that operates in the 2.4ghz transmission range so potentially another propriety feature involving Bluetooth or short range data transmission.

So these are all the rumours from Minelab and when asking them for more elaboration on these this was the response given.

“any further information on product launches this year is not something I can facilitate currently as these are kept very confidential, even internally, so I don’t have even the whiff of a rumour regarding product types or dates for you”

To wrap up one thing is very clear with all these rumours is that all manufacturers who are not Minelab will again be chasing Minelab tail this year. Minelab who are Masters of Marketing of even the smallest’s of features know how to stay ahead of the competition and who’s to say they are not the source of these rumours in the first place which all serves to bolster their mystery and position.

Of course as these devices start to be released I will sanity check them against my predictions here so lets see who was right and who missed the mark.

if you feel like taking your appreciation to the next level feel free to leave me a positive review on any podcast directory of your choice.