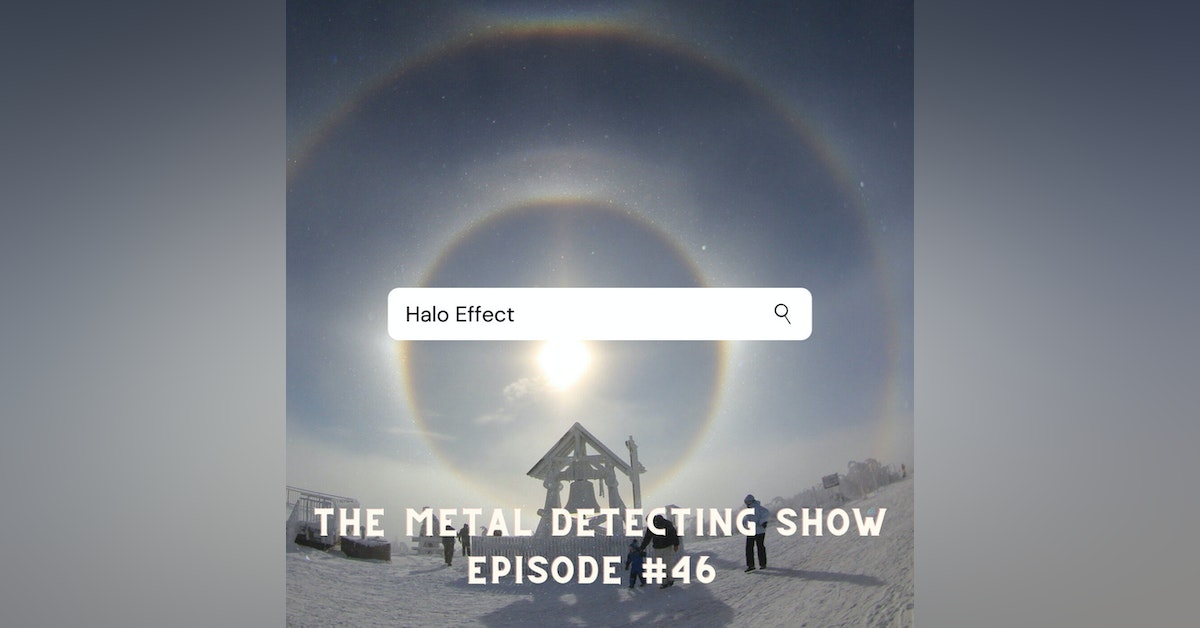 This week we discuss some recent find news from Great Britain and chat about Halo Effect. Have you ever dug a silver or nonferrous target only to find a rusted piece of iron? Do you believe in the Halo Effect, or do you think it is just a myth? lets get on with the show and find out

Other Ways to Support the Podcast: http://themetaldetectingshow.com/become-a-sponsor/

Leave me a voicemail: https://www.speakpipe.com/TheMetalDetectingShow

Hey Everybody. Welcome! to Episode 46 of the metal detecting show podcast. My Name is Ciaran and I have been Metal Detecting for nearly 30 Years. This week we discuss some recent find news from Great Britain and chat about Halo Effect. Have you ever dug a silver or nonferrous target only to find a rusted piece of iron? Do you believe in the Halo Effect, or do you think it is just a myth? lets get on with the show and find out

Hey everyone before we start I want to thank you for listening to the podcast and I hope you enjoy the show this week  but before we begin I want to give you the following information.

And now If you would like to leave me a voice mail please do so on speakpipe.com/themetaldetectingshow the link will be in the show notes.

If you would like to buy me a coffee you can Actually do so now with https://www.buymeacoffee.com/metaldetecting

Hey Detectorists I hope you’ve had a great week full of finds not pulltabs of course but of hammered coins and golden crowns.

I got out this week which was great. I hit my relic beach with the CTX-3030 equipped with the 6 inch coil I found nothing amazing however there was a few heart stoppers but the main finds were a back of an old watch, a english ½ p that nearly gave me a heart attack as it looked like a farthing and probably the best find of the day was a lead millie ball but was fully smushed but I love these so it’ll get added to my collection.

I have to say I do like the CTX with the 6 inch coil but im not sure it’s the CTX piece that’s doing it for me as I think it would lose this amoure if I equipped the Equniox with a 6 inch coil and maybe a carbon fibre shaft I would imagine that would quickly become a firm favourite for me.

I have already go this weeks hunt organised so ill let you know how that goes next week.

“I have listened to several other podcasts about metal detecting and they were ok. I was getting tired of listening to 4 people trying to talk over each other and terrible audio mixing. That’s when I found the Metal Detecting Show. The content is easy to follow, interviews are clear, and it doesn’t take hours to get the content of one show. Ciaran is always improving the show, and the topics and flavour are what I was hoping to find. Keep it up!”

Many thanks Zack I really appreciate your feedback and reviews like that are are the currency that helps Apple decide whether to promote my podcast or not So if you would like to be be like Zack please take 5 mins and review the podcast for me as it really helps in keeping the podcast alive.

So you may or may not have seen the news this week of the story about the finding of a gold religious figurine which the finder metal detectorist Kevin Duckett believes to have been part of King Henry the 8th Crown.

This assumption comes after several years of research as the figurine was actually found in 2017 but it is only now that experts are saying there is a high probability of this figurine being the real thing.

It is difficult to be certain as the original tudor crown of Henry the 8th was melted down as per the orders of Oliver Cromwell after the english Civil war in 1649.

however it is possible that the 2.5 inch figurine was removed from the crown prior and was potentially lost by Charles the 1st during his crippling defeat at the hands of cromwell during the battle of Naseby which occurred very close to the site of where the figurine was found.

Whether the providence of the find is accurate this doesn’t take away from its importance as there are very few religious artifact remaining from that period of time, making this an extremely important piece of history

which is currently undergoing independent valuation and expected to be worth somewhere in the region of 2 million pounds or 2.7 million dollars.

Not a bad days work for Kevin Duckett and congratulations to you Sir.

So Halo Effect no this is not a new game on the Xbox but an Issue that some people believe is a phenomenon that was invented by the metal detecting industry to account for inefficiencies in their detectors but every one of us come across it at some stage or another.

So what is Halo Effect, Have you every got a great signal only to have that signal disappear as soon as you dig it this is most likely down to halo effect.

But what actually is Halo effect,

Halo effect occurs when a metal is buried for a long time and over that time the metal slowly rusts or oxidises with these oxide metals leeching into the soil forming a sphere or halo of oxidisation around the object.

This can also happen in high acidic soil which is essentially accelerating the ageing process resulting in the same effect being formed over a shorter period of time.

Just to be clear this is an actual physical and chemical change accuring and if you were to analyse the soil you would see these oxides in the soils make up. So we know there is something happening.

This manifests in your metal detector like I said previously as signal that disappears completely or as a false positive signal which gets downgraded from say a high pitch target like a coin down to a low pitched iron grunt. It is essentially tricking your detector into thinking a low conductivity target is a high conductivity target such as a silver coin

how can you tell if you are over a target that may be benefitting from the halo effect. It pretty simple really as it will represent itself as a high conductivity target but will come across as a broken signal and as Iron is easy to discriminate out using your detector you turn can your detectors threshold up loud enough so that you can hear a constant hum by the way this is something you should be doing anyways.

Anyways So if you turn your threshold up loud enough you will be able to hear the detector null out the iron part of the signal no matter how it is representing it.

I use this as part of my process to help identify if a target is good dig or not. So if im getting a good signal and I listen to the signal if there is a very quick break in the threshold some people call this a scratchy signal,

in theory removing some soil should make the signal brighter if It gets worse I don’t dig it but that’s halo effect.

so potentially you could have a rusty nail with halo effect near a coin for example the halo effect will cause the detector to report a silver coin which will disappear once you dig and then you may have disturbed the coin leaving it in the side damaging it but always double check you hole you never know.

Onto Gold and the Halo Effect.

also if you look at most gold nuggets found they are not a solid lump they are porous globs indicating that alloys have leached out of the nugget and possible form some halo effect.

One more thing to ponder on if you have been detecting long enough you will notice that finds will ring up brighter after rainfall do you think this is down to the water or down to the actual minerals in the water.

Have you ever dug a silver or nonferrous target only to find a rusted piece of iron? Do you believe in the Halo Effect, or do you think it is just a myth?

if you feel like taking your appreciation to the next level feel free to leave me a positive review on any podcast directory of your choice.