Is a newer Metal Detector better than an older one. 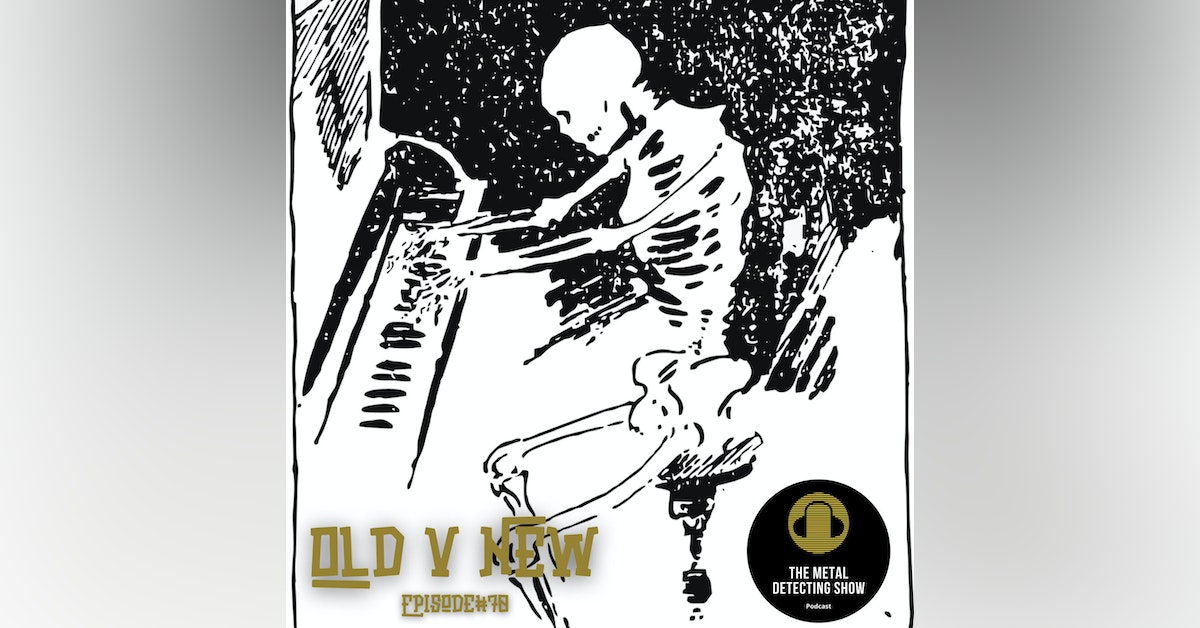 Hey Everybody. Welcome! To Episode 70 of the metal detecting show podcast. My Name is Ciaran and I have been Metal Detecting for nearly 30 Years. This week I want to answer a listeners question in that, is a newer detector necessarily better than an older one.

Before we start I want to thank you for listening to the podcast and I hope you enjoy the episode this week  If you want to support the show there are many options available from the links in the episode notes below and if you want to interact with me and the show that information is there too.

Hey Everybody. Welcome! To Episode 70 of the metal detecting show podcast. My Name is Ciaran and I have been Metal Detecting for nearly 30 Years. This week I want to answer a listeners question in that, is a newer detector necessarily better than an older one.

Hey Everyone welcome to the podcast,  I hope you have had a great week hunting this week, The crops are being harvested so its time to get out looking for permissions or at least rekindle some discussions in the hope of some new hunting grounds.

So this week I want to tackle a question I was asked a few weeks ago and that question was whether a newer detector is necessarily better than an older detector.

I belive the senitment of the question was in relation to a 10 to 20 year old detector versus an equinox or similar.

Now I thought about the answer to this question quiet a lot since the asking and I have to say initially I would have said of course newer is better,

hands down the NOX is the best bang for the buck you can buy these days. No questions asked.

We saw the demise of Whites detectors because they couldn’t keep up with the rampant onslought of technology in the hobby, I did discuss this in epsidoe “Is This the End of the Analog Metal Detector” and even in the dying last hours there were people who were singing the praises of whites as a great detector.

But the listeners question did give me a moment of pause and almost a self reflection on whether my opinion was well founded or not.

so I started to break down the question into points for example compairing older manufacturing materials vrs the newer materials. Older technology vrs newer technology and older features v new features and what I found actually gave me grounds for pause.

So starting with manufacturing materials it is no secret that they don’t make em like they used to, stuff was built to last back in the day, with steel tubing and a serious lack of planned obelences.

equipment tended to last a lot longer true however advancements in material science has resulted in the availability of carbon fibre shafts, new plastics that are both light weight and hard wearing but also manufatured to a tolerance that allows for easy application of a water proofing seal making detectors effectively submersable but ultimatily affordable due to mass maufacturing.

So older detectors tended to be handmade to some degree and made from hardwearing materials and back in the day hard wearing also meant heavy.

So not ideal but by no means a deal breaker as some very expensive newer detectors weight a tone and can only dipp their toes in the water so if I tightly squint my eyes I potentially see no difference here.

Onto technology starting with the circuitry back in the olden days of early detectors these were clunky machines that were hand built using valves which were heavy giving off heat and prone to oscillator shift which resulted in the need for a detector to be retuned regularily.

but with the invention of the transistor this circuit needed no ramp up time and released very little heat resulting in very little change in the ciruits temperature making for a more stable circuit and it was the Transistor that allowed for longer battery life, quicker circuitry and mobility, so its safe to say if your detector is still running on valves it maybe time for an upgrade but if on the other hand is running on integrated circuitry. Such as a microprocessor then the distinction is easy to make.

With battery tech its only since the advent of the mobile phone in the last 10 years that we have seen the adoption of the rechargable battery, initially nicad but generally lipo now.

prior to this the top packed item for a detectorist was to pack a spare set of batteries, I remember it well I also remember the added cost to the hobby of purchasing a set of new batteries every week because no matter how you skinned it old rechargable DD battries never performed as well as fresh nonrechargable battries.

Then the hobby adopted the rechargable battery firstly in the form of a nicad cartridge that you charge on a separate unit but cost serveral 100 bucks to get a spare because one battery would never last a full hunt but now we have inbuilt lipo batteries that last days, which if using a newer high end detector has resigned the pain of packing batteries to the recycling bin, the funny thing is now what were packing is a external battery pack to extend the life of the lipo battery so really we have gone full circle now so have we progressed that farat all.

Other technologies only abopted in the last 10 years include bluethooth/wifi allowing for wireless operation of headpohones and coils. GPS, LED Color screens even haptic feedback but has any of this improved the actually detection ability of a detector well no!

So what are we looking at now well its simple lets look at the features that make a great detector.

Descrimination which essentially allows the measurement of the phase shift caused due to differing metals under the coils.

Ground balance similar to descrimination a measurement of the phase shift caused by the ground and balancing for this.

Depth and Sensitivity ,Depth speaks for itself but Sensitivity is the measure of a detectors ability to detect an object of a specific size.

Particular frequency as per your desired targets. Differeing Frequencies have a better ability to detect different high value targets

Some sort of Display or audible indication of a good target.

Now in thinking about the question is newer better than older I wanted to do a quick search of the patients that were involved in the invention of these feature’s I thought it would take me an hour or so but it took me a long time to weezle out the relevant patients as it seems everyone and their uncle has a patient on a metal detector,

Descrimination was filed in 1975 under the title induction balance metal detector with inverse discrimination and refers to a previous patient in 1974 Traffic detector using balun transformer phase detector.

And Depth and Sensitivity Filed in 1971 under the patient called wait for it. Metal detector for identifying and discriminating between objects of different size, shape, orientation and ferrous content and including an auto nulling circuit.

What about The rest of the features like frequency and indication well Knowledge about the differening frequencies and indication of a good target seem to have been there since gerhard fischers invention of the detector back in the 1930’s.

So are you seeing the pattern here in what I am calling out.

the essential features that make up a good detector have all been invented prior to 1980 probable 1975 really.

But Ciaran I hear you say all the new detectors now have multi frequency and if you don’t have that your not equiping yourself with the best equipment out there. What if I told you the patient for Minelabs Multifreq was filed in 2004 17 years ago.

I actually believe there has been so little in the way of advancements that we saw in the 70’s since the 70’s that it is hard to say that modern detector is orders of magnatitude better than a 20 year old detector.

what seems to be happening is more of a refinement or tightening up of tolerances of old technology using modern ic’s and technology but the fundemental underlying technology is the same.

So back to the question is new better than old,

well you wouldn’t throw out an old piano if it kept tune had all the keys working and you knew it inside out and that’s the same for a new detector if your old one is doing all the things your asking from it and you can play it with confidence then why change,

why take 10 steps back just to learn a new detector when your current 20 year or even 30 year old detector is operating instinctive for you allowing you to operate in the zone almost in symbiosis with the machine.

Im not like that with any of my detectors simply because I change them out to often and maybe that’s a bad thing too but I will never again judge someone who is rocking an old whites detector.

In reality there is very little difference just a repackaging of old technology.

The only difference I can see now a days is the use of microprocessors which means that the software is actually driving the fundemental improvements we see today and its all down to taste do you prefer an electronic keyboard or a steinway grand piano.

I am for one super intrigued about this and want to start trying out these old detectors and see how they perform in my computer delicate girl hands.