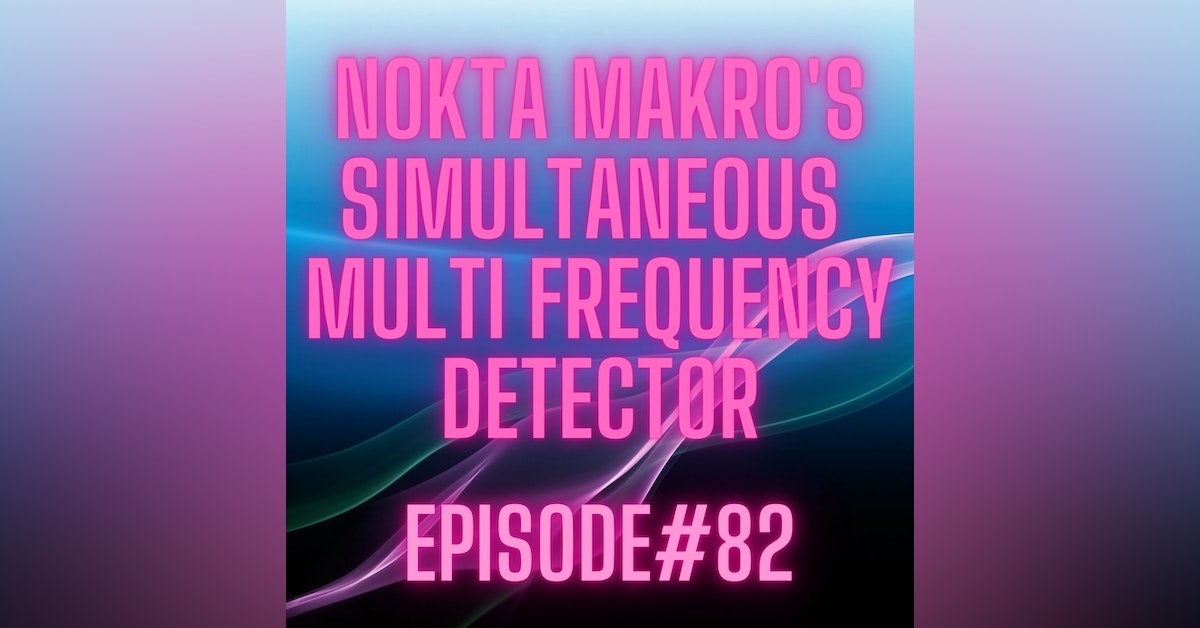 Hey Everybody. Welcome! To Episode 82 of the metal detecting show podcast. My Name is Ciaran and I have been Metal Detecting for nearly 30 Years.

This week it never rains it pours after 18 months of no new detectors we have two in the space of a week so let's talk about those this week.

Hey Everybody. Welcome! To Episode 82 of the metal detecting show podcast. My Name is Ciaran and I have been Metal Detecting for nearly 30 Years.

This week it never rains it pours after 18 months of no new detectors we have two in the space of a week so lets talk about those this week.

Hey Everyone a bit of a newsy episode this week but I hope all your news has been good this week.

So this week I got out for a quick beach hunt that got washed out with an Atlantic storm rolling in I didn’t get much in the way of detecting however I did get to experience the mighty power of nature first hand which is always an awe inspiring moment.

I tried it  myself and I have to say it looks very promising and I am looking forward to putting it through its paces with a few slices of toast each week thanks Dave Appreciate your input as always.

But that wasn’t the big news over the weekend and if you’re a nokta makro fan/user you are 100% aware by now of the announcement from Dilek to thunderous applause all over the social medias and that’s the announcement of the SMF Live Launch event on November 19th at 6PM GMT +3.

Now lets be clear there has been no product launched yet only the announcement of an event where the product will be launched so speculation is rife across the web to what this eagerly anticipated detector will look like and what it will cost.

I have condensed the rumours down to what seems credible and potentially plausible for what to expect with the SMF launch.

Starting with the Name early conversations hinted that it may be called the Simplex Multifrequency however Nokta Makro have been quick to put some air between that by socializing the idea of the Simultaneous Multi Frequency Detector however the actual name will be announced on the day. Im just gonna call it SMF

However there was no accounting for covid and the chip crunch causing delays so we can cut Nokta some slack here.

Other features rumoured are the addition of low latency Bluetooth headphone but without Nokta makro’s previous proprietary Bluetooth technology thus allowing you to be more budget conscientious with your selection of third party headphones.

Nokta Makro have been very quiet about what frequencies the SMF Will operate at with the only indications being that it will go high enough for gold prospecting so in my book that somewhere north of 40khz.

In terms of appearance Nokta Makro have more or less confirmed that the SMF will exist in the same form factor of the Simplex+ Which I liked but will be packed with completely different and new technology.

And what will all this cost well some are saying it will come close to the equinox however  I expect it to come in close line with the vanquish pro pack around 499 pounds.

But lets see on November 19th

Dilek has committed to coming on the show once the SMF is released so watch this space.

Now I was just writing up this episode and what do you think happened didn’t XP only go and Launched the Dues II A Fast Multi Frequency machine.

Not marketing an event to launch like nokta makro but actually launched the Dues II which you can buy right now from XP dealers for a whopping 1600 euro depending on what configuration you go for.

So straight away XP are saying at this price point they are not interested in competing with Minelabs Equinox or Nokta Makros SMF but feel they have something that expresses the cost of this machine in its wide set if features such as fully wireless multi frequency with up to 49 frequencies individually selectable from 4khz to 45khz, fully submersible to 20 meters with a telescopic carbon fibre shaft and bone conduction headphones which I think the idea of is the nuts.

The control housing is fully shock proof and guaranteed to that 20 meters depth.

Available straight off the bat with a 9” coil or an 11” Coil and a multitude of accessories.

Has this stolen the thunder from Nokta Makro No! in no way has it taken any thunder from any of the existing or soon to be coming multi frequency machines simply because it is being marketed as a high end machine with a price point to suit it.

Either Way its exciting times with not one but two new detectors on the horizon and I for one am looking forward to getting my hands on both so I can give you guys my own impressions of the detectors.

HA hahaha havnt done that for a while heeheheh

But this week because of the release or pending release of 2 multifrequency machine’s I thought I would cover what multi frequency is and is it the next level of detection equipment.

So firstly a lot of people think this is a minelab technology however you just have to look into the patients to see that there was a patient for this back in the late 80’s and with a little digging about you can see that the Fisher CZ and the Whites DFX were technically multifrequency machines and even the minelab BBS technology which supposedly transmitted 17 frequencies with the reality being about 3 or 4 frequencies being used at one time or another.

So Minelab wasn’t the first to market with this tech and it clearly wasn’t the last with this weeks announcements so multifrequency is not necessarily the cutting edge.

So why would you want a multi frequency machine well it seems to me the top reason is in salt water environments as multi freq offers an amazing performance in this environment this is why you see every beach hunter online using an equinox. There is nothing that can come close so far. They are also more suitable for coin, relic or jewellery hunting.

So how does it work?

well if you remember my selecting frequency to best serve you needs episode,

we talked about how specific frequencies are better suited to particular targets.

Low frequency is better for large silver and more depth while at the other end of the scale high frequency of 40+ khz are better suited to small gold or gold prospecting with greater sensitivity.

Most detectors will transmit and receive one frequency at a time imagine your detector is flip flopping between transmitting and receiving and when it receives a signal returning it needs to process this received signal, display the results and then transmit again.

this is all very serial or procedural in nature while a multi frequency machine will transmit, receive and process all the frequencies simultaneously in parallel.

now you might go cool and think that fairly simple however where the difficulty is in this scenario is that the coils which are normally tuned to one frequency now need to be tuned to a wider range of frequencies. which is not easy to do, all this while ensuring each step is in sync with each other.

There is also a requirement for fast signal processing as the received information is vastly greater in magnitude of a single frequency machine.

Think of a computer constantly processing dynamic fast fourier transforms 1000’s of times a second so a lot of the tech in the a multi freq machine is not so much in the ability to transmit multi frequencies but the ability to process the vast amount of information received that the returning signal generates.

If I tried to explain multi freq to someone who doesn’t detect I would use the following analogy.

A multi freq machine is like a shot gun that fires shotgun shells at the same rate as a machine gun does so loads of lead of differing sizes flying at the target impossible for a human to track each shot to see individual hits however that’s what a multifreq machine needs to do several 1000 times a second.

Will the nokta makros SMF or the XP Deus FMF live to disrupt the metal detector market who knows but I am certainly looking forward to getting my hands on these and congratulations to both companies to getting these detector out in such trying times.