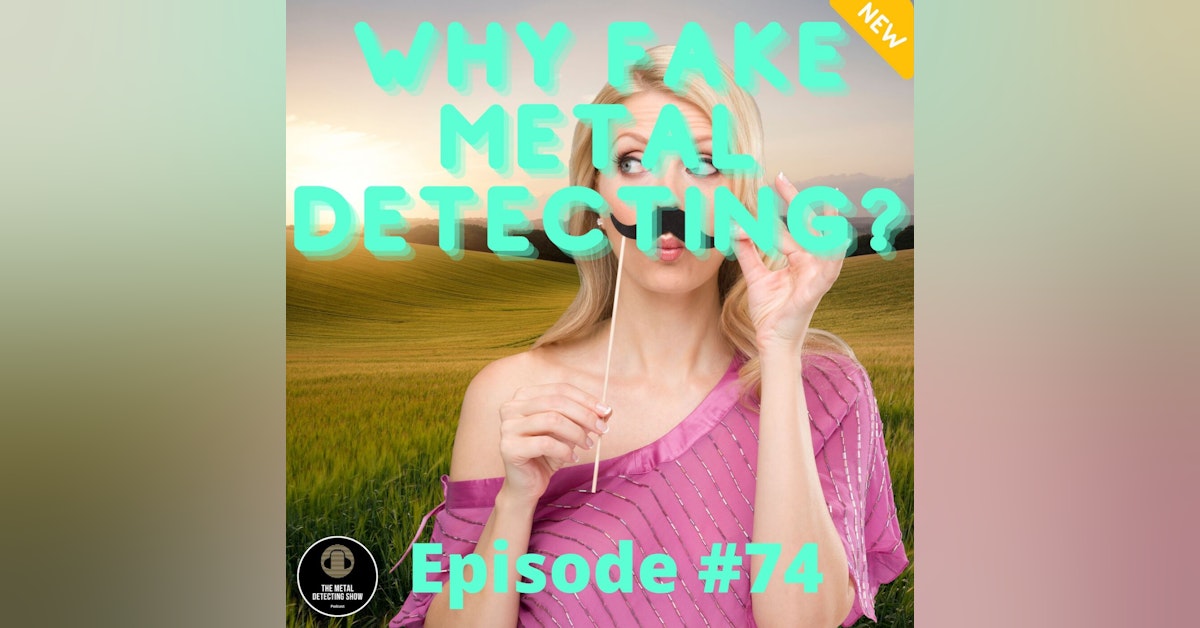 Hey Everybody. Welcome! To Episode 74 of the metal detecting show podcast. My Name is Ciaran and I have been Metal Detecting for nearly 30 Years. This week I want to talk about the fakers the scammers and the sad people who like to fake there finds.

Before we start I want to thank you for listening to the podcast and I hope you enjoy the episode this week  If you want to support the show there are many options available from the links in the episode notes below and if you want to interact with me and the show that information is there too.

Hey Everybody. Welcome! To Episode 74 of the metal detecting show podcast. My Name is Ciaran and I have been Metal Detecting for nearly 30 Years. This week I want to talk about the fakers the scammers and the sad people who like to fake there finds.

Hey Everyone welcome to the podcast, I hope your week was amazing and you were able to get out on the fields or beaches detecting. Not much in the way of detecting for me this week a few hours on a beach looking for a lost ring that never appeared is all.

My Detecting  this  week was more virtual as in it was all online I caught up on some channels I like to follow and checked the forums that I hadn’t  checked in in weeks. I  don’t know  if you know this  im really bad a social media as in I  dip in and out wmost days but not religiously and not always about metal detecting I think that’s  healthy right!!!

Anyways this week I don’t know what it is but  for some reason the internet machine kept  serving me up forum posts and youtube videos when people were accused of planting finds it was weird, for example I was on the Friendly Metal Detecting Forum where there was a thread that was calling out a faker,

I went to teasurenet and one of the first threads I clicked started out with this guy getting a savage amount of kudos for a couple of hammered’s he found only  for the  thread  to descend into a mess of accusations  and some really cleaver proof of the original posters acquisition of the hammered  off of Ebay.

I then went to youtube only to be greeted by  Grahame from unearthed calling out the fakers as well so I started to think about this as a topic this week and wondered  why  someone would do this and I have come to the conclusion that people do this for two reasons one being for the kudos you get online for this setting yourself up as some authority on the subject and the second reason is for monetary gain,

they do this without a thought to the  hobby and how it is putting the hobby from a high level into disrepute ruining  any positive impression the archaeologists would  have of us but also setting an incorrect perception of the potential success an finds you can  expect when partaking in the hobby.

Ill talk about youtube in a bit But first why do they do this why do they feel the need to get this fake kudos on a forums  or a social media of peers that they have never or will never meet face to face. I think in the social media arena people are doing this from a low self-esteem position they feel so shit about themselves that they believe that by generating  some fake finds it will fill the gaps they have in their lives they believe by doing this online that  they have some level of anomy that if it goes wrong they can walk away unscathed, they perceive it as a low risk for the potential rewards of some virtual kudos points but I bet they still go back to their bedsits an flagellate themselves trying to fill the sad casim they are trying to fill maybe im just happy in my skin while confidently posting a few pics online of my rusty old worthless coins every week commenting on how many bottle tops I found this week.  What amazed me in both threads was how these plebs got caught what the sherlock holmes did  was take screen grabs of the dodgy posts and did a reverse image search of the finds which borught them to the old listing on ebay, I wonder where they got that time from  obviously long time listeners hehehehe but once they had the finds they were able to link them even more but identifying uniques blemishs on the coins that showed up both the ebay picture and the post picture ingenious and fair play id love to know what made them suspicious  of the posts I suppose I could ask on the forums .

Now if you look at it from the point of view of monetary gain it is a very different story and maybe more sinister.

But anyways did you know once you get over 1000 subs on youtube you are entered into their affiliate program and you are paid and average for 2021 right now is $7.50 per 1000 views.

Take that in for a sec youtube will pay you 7.50 per 1000 views so lets take the most popular metaldetecting video on youtube for all time by Dude Perfect at 63M views over the last four years that video earned dude perfect inc a whopping 470 thousand dollars that’s not including any promotion they may have in the video.

So half a million dollars for one video now that’s at the top end of the scale but say you are putting out a video that gets 30000 views every week  that  would net you a nice part time 11K a year. BTW don’t watch that dude perfect video it’s terrible.

The youtube algorithm works and im putting it very simply here by suggesting videos to you based on what similar people are watching right now or similar to what you have watched in the past.

It determines this by what you have looked at in the past what you have liked and what you disliked  it doesn’t care to youtube there is no difference between a like and a dislike.

So imagine your scrolling through youtubes suggested video’s and it has maybe  15 videos on  the screen for you all about metal detecting which one are you most likely to click the one with the  15 pull tabs and 3 dollars in cash or the one with the big clay pot of gold staters I know which one im going to click. The staters of course.

So now youtube knows what I like and it’ll keep serving up this to me if  it can.

Youtubes primary goal is to keep you watching and in the platform for as long as it  can  and will reward videos that will do this. Im gone a little deeper  than I wanted here but can you see what im getting at Faker detectorist are planting finds so they can get more likes not from detectorists but from the general public so its almost a business to them.

Now again I am in no way slating youtubers I would be really stupid to do that and most are great ive had some great ones on the podcast but you can instinctively tell the ones that are planting  there finds. For example if  you look at youtube channel first if the channel is new and all of a sudden they are pulling in loads of great finds with very little trash that’s  a red flag. If they pull out a silver coin and it has very little corrosion on it I have even seen people pulling a silver coin out of the ground and it looked like it  had been chemically cleaned that’s a red flag.

If  they go to a field that has never yielded roman finds and all of a sudden they are pulling out roman finds that’s a red flag.

Each of these red flags are not enough to suspect someone on its own but if there is enough of them or as the French say if there is a cloud of evidence then your suspicions  are valid.

The good thing about the youtube fakers they are generally short lived as it is an expensive business to  buy new coins to plant every week and believe me  for  you to be successful on youtube you  need to be consistently successful to  start bringing in the views.

That’s why I never did it I did one video and realised how hard it was going to be to generate views with the crap I find week on week. So I didn’t do it I pivoted to the podcast listen it is very hard to find success as a detectorist on YouTube you have to be successful consistently or else you need to rely on something other  than detecting to keep the people looking like  being funny or having a bunch of you detecting or by making the stuff you find interesting like most great mud larking videos or by making where you are detecting interesting. It’s a thought ask and I can see how the fakers fall into the trap of planting finds.

But planting finds isn’t only for YouTube you hear rumours that several events in that past were held  on fields that were seeded with roman coins which again is a business decision that puts the hobby into disrepute and should be stamped out.

Outside of YouTube and I think I ranted about this before about people posting on Instagram, FB or twitter pictures or hundreds of finds with the caption not a  bad 4 hours at the beach today which is total BS and everyone know it and you just look sadder for doing it.

What I look for in any post/video that I will engage with is it genuine to my understanding of the hobby, did I see them pull it from the hole on camera.

Is the good finds to trash finds about right across their channel or account. We can all spot the fakers thanks god they are short lived as they are doing nothing positive for the hobby and you are a sad sad individual if your doing this.